In this winter of our discontent — specifically, Monday, February 16, 2021 — our six-month-old furnace went out, and my wife and I were freezing in place. Jennifer exclaimed, “I am 74 years old, and the temperature in the house is 47!”

Better, a wiseguy friend suggested, than 80 years old and eight degrees in the house. (And certainly better than the long, unmitigated power and gas outage in Texas.)

But we called our HVAC installer, and they sent someone out the next day. This large fellow (let’s call him Charlie), who barely fit up the stairway to the attic where the furnace is located, fixed the problem quickly. A piece of ice or other debris had gotten lodged near the igniter, and he removed it.

After the job Charlie regaled me with a tale about a “good old boy,” he said, in Pea Ridge, a little town northeast of Fayetteville, who, along with lots of other folks in his neck of the woods, lost his natural gas supply entirely. The good old boy, Charlie said, called the company to relight his natural gas furnace. By the way, he said, his water heater was froze up. So did he have a gas stove? Yep. Was it working? Nope. Well, gas was not getting to Pea Ridge at all, so no gas appliance would work, including furnace. It would do no good for Charlie to come out until the gas supply was running again.

Pointing to the snow all around us, I told Charlie as he was about to leave that a climate scientist is calling global warming “global weirding,” and he assured me, “There ain’t no such thing as global warming.” So we bumped elbows on that one (he was wearing a mask, thank god, or thank his employer); and  not wanting to discuss politics, I let him go his merry way, this good ole boy, while I went mine, thankful for his HVAC expertise if not his political or meteorological acumen. 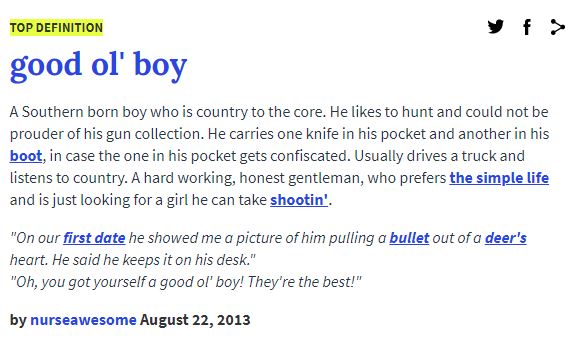 Would I infer correctly that Charlie is country but not that country? That he might have a  gun or two but not a big collection? That he carries only one knife at a time? That he knows how to read, whether or not he does, and doesn’t need his GF or wife to accompany him on the hunt?

The whole affair would be simply ludicrous if it weren’t for the political implications of Charlie’s assurance. He doesn’t know, and doesn’t want to know, anything that contradicts his current beliefs. Donald Trump and Rush Limbaugh (may he not rest in peace) have been filling him full of non-scientific balderdash, and he doesn’t want to admit he or any other human could be responsible, in even the tiniest way, for climate change because he drives a gas hog for work or pleasure, and damn well likes doing so, and won’t be without his boy toys or power fetishes; because he believes even today in Manifest Destiny, expanding every upward, outward, westward; because, well, just because.

Because, it could be, as the clinical psychiatrist Richard A. Friedman suggests in a powerful recent article in the New York Review of Books, conspiracy theories and anti-scientific thinking, like those preached by the Trump mob that stormed the Capitol on January 6, were

… not because they were suffering from group psychosis. It is not probable that tens of millions of Americans would be frankly delusional, in a clinical sense. The answer lies, rather, in something fundamental about human psychology and cognition: we are hardwired for plausibility, not truth. We rely on our intuition, which is often misleading, not on fact. And this cognitive trait is a particular liability in the age of digital media in which we are drowning in information—as well as misinformation and outright disinformation—because we are ineluctably drawn to data that confirms our worldview and repelled by data that contradicts it.

Moths to the flame, hey? Ineluctably drawn? A good reason to practice a bit of humility before we pronounce ferociously on any matter, especially one we know little of, have not read about, and about which we are just shooting off our mouths.