The poet William Butler Yeats wrote “Politics” in 1938, on the eve of WW II. It’s a short poem and a provocation, seems to me, in times like these.

“In our time the destiny of man presents its meanings in political terms.” — Thomas Mann

How can I, that girl standing there,
My attention fix
On Roman or on Russian
Or on Spanish politics,
Yet here’s a travelled man that knows
What he talks about,
And there’s a politician
That has both read and thought,
And maybe what they say is true
Of war and war’s alarms,
But O that I were young again
And held her in my arms.

Yeats wrote this ditty in May 1938 and died the following January. So, yes, the world was on the verge of WW II and Yeats was on the verge of dying. A no longer young man’s thoughts turn to spring, or the springtime of Eros, as signified by the girl he sees on the street.

But is Hitler going to slow down for a girl? Is Donald Trump?

Well, let me rephrase that. Hitler had Eva Braun and his world of hate. Trump has his hatred if minorities and immigrants — and as many women as he can molest and get away with.

We understand why old folks regret their dying, their passing into eternity. In “Sailing to Byzantium” (1928), Yeats wrote, “An aged man is but a paltry thing” unless he invests in soul or sails to Byzantium:

O sages standing in God’s holy fire
As in the gold mosaic of a wall,
Come from the holy fire, perne in a gyre,
And be the singing-masters of my soul.
Consume my heart away; sick with desire
And fastened to a dying animal
It knows not what it is; and gather me
Into the artifice of eternity.

Without exaggerating the state of the planet at this time, and gods know it’s bad enough, with floods and hurricanes in one place, fires in another, man the consuming and exploiting animal dominating nature, as if he would gladly wipe it out entirely, I would suggest not sex or politics as the answer to our problem but poetry.

Poetry is the most speculative of the arts. It can range hither and thither, up into the celestial regions, down into hell, searching for the answers to the eternal questions: who are we and what in the devil are we doing on this planet?

Politics is the art of the city (polis), of living together in cities and communities and trying to make a go of it. Sex is, well, you know what sex is, the conjunction of bodies and sometimes minds with them, in celestial and/or diabolical alignment.

So while we decide here in the USA on Trump vs. Biden, this autumn of the Year of Our Lord (if any) 2020, let’s not forget the offices of poetry: why are we here? to what end? and how do we explain this miracle of being? 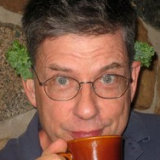 Greg Zeck taught college English in Michigan, Iowa, and Minnesota. He also had a career in freelance business writing and communications. He's retired now in Fayetteville, Arkansas, with his wife Jennifer, where he continues to read, write, bike, hike, and garden.

Don’t Zap the Zeck! That’s really beautiful Greg.
You’re no marionette for a martinet.
Big picture view is the way go.
He’s a friend in need and you’re a friend in deed.

Big picture can be entertaining and elucidating, can’t it, Ms. Coco, thanks. Little picture would be peevishness at the bossiness. Big picture is seeing the scene for what it is: grist to the mill. Am I mixing my metaphors? Oops! There you go. Life is a crazy jumble, and writing reflects it.